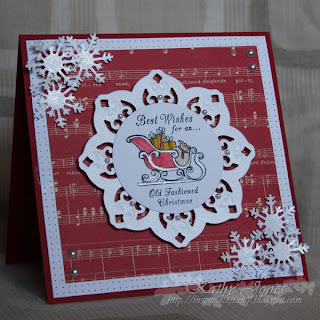 Hello again everyone!!! Today I decided to do the CPS Sketch Challenge and thought this sketch would be perfect for a Christmas card. Yes I know it doesn't snow in Australia at Christmas (or actually never where I live but I digress...) but those circle things on the corners were just asking for snowflakes don't you think?? :)

I started with a base of red bazzill, layered with white and then some Cosmo Cricket Jolly by Golly DSP. On the white layer I've double pierced it all the way around (and yes, my hand did hurt by the end!). The centre has been cut out of some shimmery white card using the Renaissance Hearts Pendant die and in the centre I've stamped the image from the Old Fashioned Christmas Set by JustRite. I stamped the image in Jet Black Stazon and coloured with markers and along the metal parts of the sleigh I've painted it with some Angel Wings Shimmerz that my wonderful friend Michelle sent me!!! I then popped the whole panel up on foam tape. For the circles on each corner I punched out 6 Martha Stewart Arctic Snowflakes in white and painted them with Shimmerz as well. (While doing this it occured to me that I really could have used the shimmery white card.....but that wouldn't have been as much fun would it??) I popped the centre snowflake up on a pop dot for dimension. Then I looked at it and decided something was missing, so I added a couple of Kaisercraft snow pearls to the other two corners and a small one to each of the pendant points.

This is gorgeous Kathy! Love the SB die!

Another beauty Kathy - I love the Cosmo Cricket dp and the little JustRite stamp is beautiful! Ooh and the pendant - lovely!!
Um I've kind of CASED your All about Fonts card in my post tomorrow - well ish. Hope you don't mind I've linked back to your card as the inspiration.

Wonderful Christmas card, I like the snowflakes and its a great sketch.
You don't get snow... gasp... I love the snow ( as long as I don't drive in it) Have you ever lived where it does snow?

What a beautiful Christmas card!

Fabulous Christmas card Kathy - love the colours and those snowflakes are so effective! Your pearls are the perfect touch - I would have been SHOCKED not to have seen any! LOL! Thanks for sharing Kathy - your work is always inspiring!! God bless you! {{{hugs}}}

Everything is so beautiful! LOVE them snowflakes and isn't Angel Wings the best!?! Hugs,

Oh Kathy I love this! First, the JR image is so nostalgic and I love it! Love the SB Pendant... looks very snowflakey! I really love the double row of piercing! Wow! Just beautiful!

OK, so the card is good, particularly the BG paper, but seriously... snowflakes???? I hate snowflakes they are nearly as bad as snowmen... s'pose I can ignore those and just look at the die cut and the image ;-}

I love your card and especially the musical paper - I play piano and sing and this would be great to find. Your card gets an A+ from me.

Its a beautiful card - love the details!

That is such a beautiful card Kathy. Love everything about it. :)
Edna x 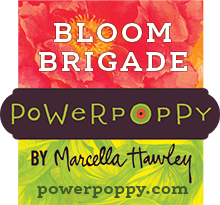